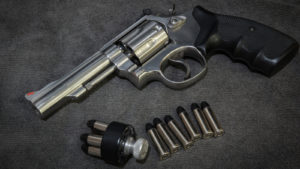 Smith & Wesson Brands Inc (NASDAQ: SWBI at https://www.webull.com/quote/nasdaq-swbi ) is a company that operates in the manufacturing of firearms. The company was established in 1852. The company was formed with the partnership of Horace Smith and Daniel Baird Wesson to get its name like Smith & Wesson Brands Inc. The products produced by this company were majorly the firearms that can fire and be fully loaded with the pre-assembled cartridge. The design and innovation of the firearms were the major factors that brought about its reliability.

The production of these firearms by the SWBI has been famous since 1852. The history of their usage since then has been vast and popular. Since then the company has become famous in terms of production of these firearms and has also produced various army forces. In the 21st century, they have not only increased their productivity but also have founded innovations that have increased their popularity across the globe.

The SWBI has its headquarters located at Springfield in Massachusetts in the United States. In 2016, the SWBI became one of the major units under the American Outdoor Brands Corporation, which is a Public Company. There has been a restructuring of this company since then. With the subsidiaries as Thompson/Center Arms, the owner since 2016 was American Outdoor Brands Corporation. As of 2017, the company had around 2,200 employees working for the production of firearms. This was a decline in the employment rate due to the decline in the demand for firearms by various retailers and distributors. The demand declined by around 38% which had a severe effect on the company’s overall growth and development.

The company also had a very bad image due to various incidents that took place in which the criminal used those weapons manufactured by the NASDAQ:SWBI. There were also several incidents that made the company come under critical surveillance. The major incidents were the 2015 and 2018 attacks. In 2015, there was a usage of these weapons in the mass attack that happened at the Inland Regional Center at San Bernardino in California.

This incident took place in the month of December 2015. Again in 2018, the weapons manufactured by this company were used in the mass attack at the Stoneman Douglas High School located in the Parkland in Florida. This incident killed around 17 people and also injured many people. The weapon was used by a 19-year-old person and the weapon was manufactured by the SWBI.  You can do online stock trading after checking enough stock information. Disclaimer: The analysis information is for reference only and does not constitute an investment recommendation.